Music as Kaleidoscope: Tracing Similarities on the Global Jukebox

The Global Jukebox has assembled many thousands of recordings from all around the world. These songs are analyzed using a coding system developed by Alan Lomax, Victor Grauer, and Conrad Arensberg called Cantometrics, a comparative method of measuring music based on several characteristics found in singing worldwide. The result is staggering in scope, and allows the user to isolate patterns across regions, areas, and cultures, and begin to recognize “families of musical style.” 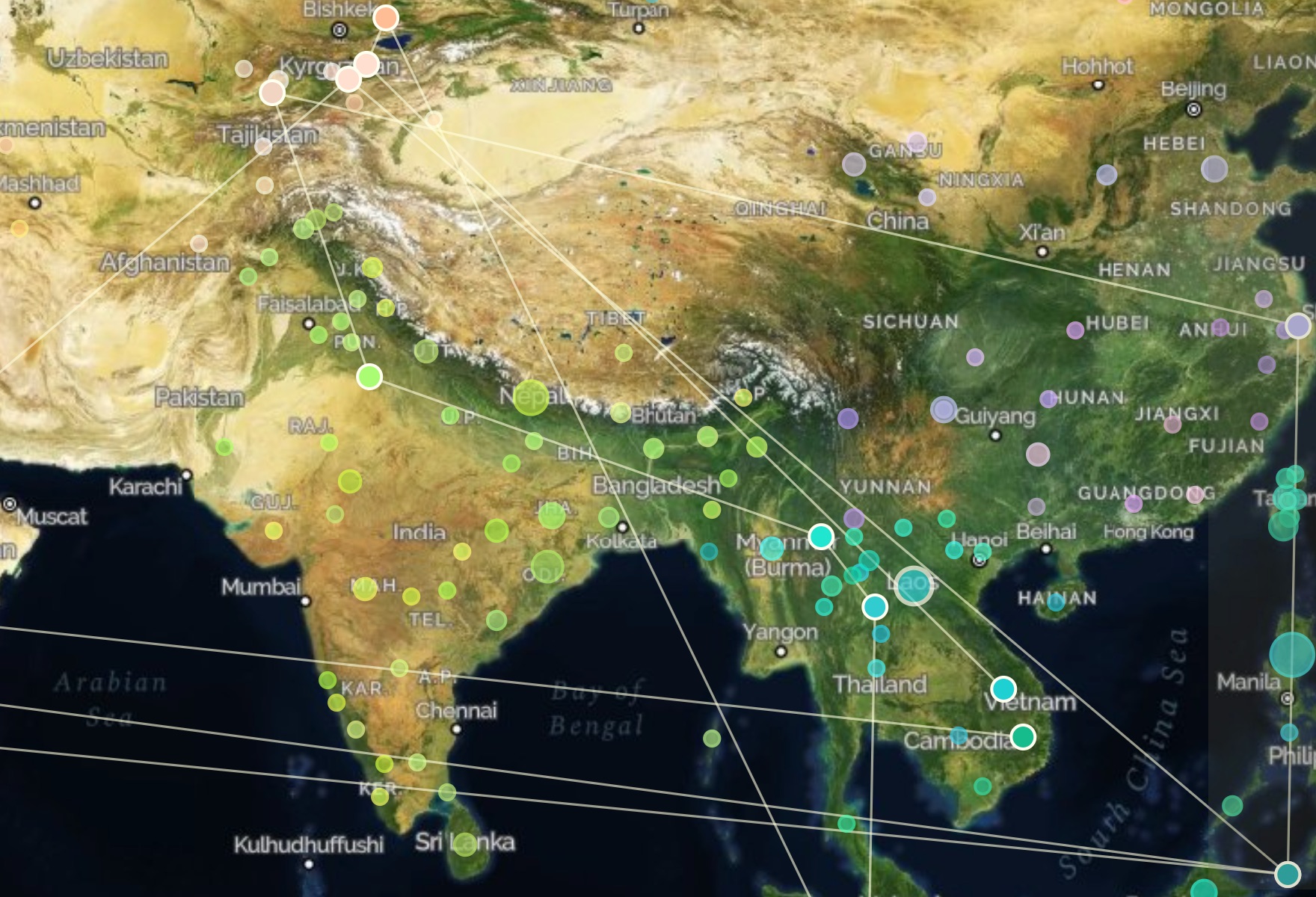 A new user, I never interfaced with the Global Jukebox before. I wanted to visualize the immense range of cultural diversity within a specific region, while utilizing the Cantometrics coding system to offer insight into the myriad musical commonalities between my selections and other recordings available via the GJB.  As an introduction to using the website, I compiled a GJB playlist of songs where I took songs across the islands/mainland of Southeast Asia and paired them with their strongest cantometric matches from around the world.  Here are my selections, along with annotations highlighting some interesting cantometric patterns I noticed:

I moved from Hainan Island over the Attapeu Province in Laos, where I came across this magnificent recording of a Laotian woman singing in Lao, accompanied by a khene, which is a Laotian mouth organ made of bamboo. Laotians are Theraveda Buddhists, and have a long tradition as rice growers. Many of their works of art, literature, and religious practices center around the growing of rice. Some of the strongest cantometric similarities are with a song from the Kyrgyz people of Turkmenistan (My Tian-Shan; My Tjanj Tjanj) and one from Kazakhstan (Kanapya). Within South East Asia, the strongest similarities are found with a Minangkabau song from Indonesia (Gambus) and a Thai song (Girl’s Song). All of these songs feature a single vocalist singing in an irregular meter and rarely repeating text, accompanied by at least one instrumentalist.

Over to Myanmar, to a Shan song sung by San Toke in Shan. The Shan are the largest minority group in Myanmar. This is a folk song sung by a solo singer accompanied by a double reed instrument and a melodic percussion instrument that reminds me of an African kalimba. The strongest cantometric similarities are with a Punjabi Folk Song (Folk Song From Haryana) and a lyric song from Uzbekistan sung by Atrikkhodzha Imamkhodzhaev (Kim Desin). The closest regional match comes from an stunningly beautiful opera from Shanghai (Shanghai Opera). All of these pieces are defined by a solo singer leading a group of accompanying musicians, little to no repeating text, and a simple rhythmic meter.

My next selection comes from the South Philippines, on the Sulu Archipelago. It features a Tausug man singinging in Tausug, accompanied by a gabang player (a bamboo xylophone used extensively in the South Philippines).  The strongest match I found was a patriotic song from the Tigray Province of Ethiopia (Oh, My Country), featuring a male singer accompanied by a begenna and a harp. Another was Ak Bermet, a Krygyz song performed by a male singer alternating melodic lines with a komuz player. Within Southeast Asia, the strongest cantometric match came from the same region, in the South Philippines. Solo Song 1 is another piece by the Tausug people, this time accompanied by simple drumming. Intriguingly, the fourth strongest connection I found was with a song from Central Texas, called Bandit Cole Younger, sung by Edward L. Crain. All of these songs are connected by symmetrically arranged phrases, little repetition of text, and one accompanying instrument.

The next recording I found features some incredible vocal polyphony from Flores, Indonesia. Sung in Sika, it was originally a work song, although nowadays it's also sung to accompany celebratory togo dances. The various voices become interwoven in a really hypnotic way. When I look for cantometric similarities, the strongest matches are found across the African continent. Nyambilichina Twali Akwawu Ku Muwewu is a call and response dance song sung by eighteen Lunda people from the northwest of Zambia. And another strong correlation comes from the Tikar Plain in Cameroon. Ndondon features a mixed chorus, drums and rattles. These recordings are united by their polyphonic arrangements, their social organization as call and response songs, their maximal tonal blend, and their rhythmic coordination.

My last selection comes from Sabah, in Northern Borneo. Sung in Tagal Murut by a mixed chorus of Murut Peoples, it's another captivating example of Southeast Asian Island polyphonic singing. Muruts are related peoples inhabiting the interior of Indonesian Borneo. The chorus sings in harmony, with a mixture of sustained pitches and sung lines. The strongest cantometric matches come from a few different places. Engagement is a Thao-Ngnan ritual song, performed by a female chorus and recorded in Taiwan. There is also a strong match with a Creole hymn from Grenada called Come ‘Le We Go. All three recordings are defined by their vocal polyphony, with no additional harmonic input from other instruments, sung in rhythmic unison, with little to no repetition of text. To me, this style of singing is reminiscent of sacred harp singing traditions in the southern United States.

Constructing this playlist was a fascinating introduction to the Global Jukebox. This sophisticated coding system can offer immense insight into recurring global patterns of human musical expression. Throughout this process, I was surprised that the strongest cantometric pairs were never from the same region (or even from the same continent). This illuminates the kaleidoscopic quality of our world’s languages and cultures, which are in constant dialogue and intersection. This powerful tool allows for a nuanced understanding of human interconnectedness.