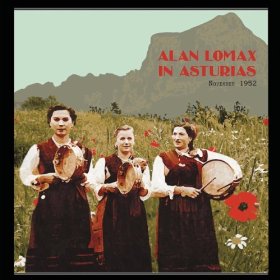 Alan Lomax in Asturias, 1952: The End of Everything

Alan Lomax visited Asturias, in northwestern Spain, in the autumn of 1952. While the regime of the dictator Franco was then threatening the traditional expressive diversity of regional Spain in its quixotic quest for a unified national identity, Lomax's recordings succeeded in painting a portrait of a thriving Asturian musical culture. He collected love songs, lullabies, children's games, work songs of the vaqueiros (cow herders), chorales and folk dances for saints' days, ballads accompanying the tasting of new cider, the ancient corri-corri dance, and the music of the characteristic Asturian bagpipes; the veijixu (a filled wineskin); and the payella – a long-handled frying pan played only by women. This release explores one of the earliest and most extensive field recording trips in the land, as it's said in Spanish, en el fondo del saco – "at the end of everything."

Alan Lomax in Asturias, November 1952 features over two hours of music, most of it previously unreleased, and is available both as a digital download and as a hardback book/double-CD set produced in collaboration between Global Jukebox and the Museu del Pueblu in Asturias, Spain. The two CDs of 101 songs are packaged inside a trilingual (English, Spanish, Asturian) 170-page hardcover book beautifully designed by McSweeney's Barbara Bersche. The book is edited by noted Spanish-music scholar Judith R. Cohen and includes introductory texts and song notes by several Asturian music experts, lyric transcriptions, illustrations, and many rare and never-before-published photographs. The retail list price for the book/double CD set is $28.00.