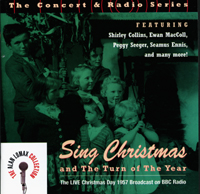 “Fans of uber-folklorist Alan Lomax will be floored by this holiday-oriented tour de force… The tightly scripted program features narration by Lomax, who waxes eloquent about the social and mystical roots of Britain’s Christmas traditions. Lomax was ahead of the curve in so many ways on this project, it’s hard to know where to begin — stylistically, technically, cross culturally — this was an ambitious, professionally realized broadcast that gathered together the best of Britain’s folk talent, and yet retained the charm of a grade school talent show. … Fascinating as a work of art and an historical document, this album is one of the jewels of Rounder’s extensive program reissuing Lomax’s vast recorded legacy. … A dazzling show!” —Slipcue