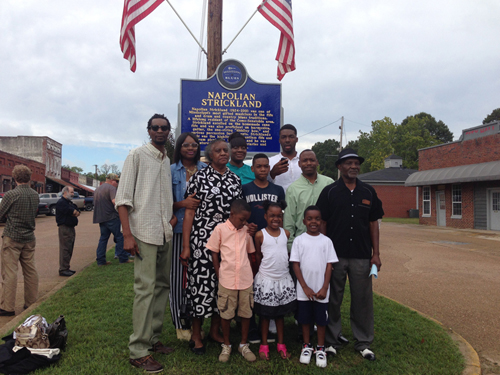 The Association for Cultural Equity had the great pleasure and privilege in participating in "All Our Friends Hill Country Blues Celebration," held in Tate and Panola Counties, Mississippi, from October 5-12, 2013. Organized by Alice Pierotti, librarian at the Emily J. Pointer Public Library in Como, Miss., the celebration had as its centerpieces ACE's repatriation of Lomax's Tate County audio, video, and photo collections to the Senatobia Public Library, and the unveiling of a Blues Trail Marker in honor of Hill Country multi-instrumentalist Napolian Strickland.

We arrived at the Pointer Library in Como on Friday, October 11, in time to see local bluesman Martin Grant demonstrating the traditional way to make (and play) a cane fife. Alan Lomax made the first-ever recordings of the Hill Country's fife-and-drum music in 1942, in neighboring Quitman County, at a picnic where bandleader, composer, and Senatobia native Sid Hemphill was performing with his group. (These '42 recordings comprised part of the repatriated collection to the Senatobia Library.)

Later that afternoon, the photographer and recordist George Mitchell gave a talk on his 1960s Hill Country blues photos, which were on display at the Pointer Library. It had been 35 years since Mitchell had returned to the Hill Country, and he was able to meet some of the relatives of artists whom he had shot and recorded in the '60s. They helped identify some of the faces that appeared alongside legends of the North Mississippi African-American music scene: among them Napolian Strickland, Otha Turner, R.L. Burnside, and Fred McDowell.

We were treated Friday night to a fish-fry picnic at the home of the Bartlett family, who have been farming just outside of Como for generations. (It was on their land - just across the road from the farmhouse where we stayed - where Lomax, John Bishop, and Worth Long shot their footage of a 1978 picnic featuring the music of Napolian Strickland.) Music was provided by Dr. David Evans, renowned blues scholar and singer-guitarist, and long-time friend of ACE. He performed classic blues, hokum, and jug-band material, and was joined on a few songs by George Mitchell on washtub bass.

Saturday morning we drove eight miles north of Como to the Senatobia Public Library, where the repatriation ceremony was being held. We and Alice Pierotti had invited heirs of the Hill Country artists whom Lomax had recorded to the event, but none of us anticipated the incredible turn-out: of the 50 some guests, at least half were relatives of performers who had met Alan on one or more of his visits in 1942, 1959, and 1978. Not only had kin to Otha Turner, Napolian Strickland, and Lucius Smith joined us, as we had expected, but also relatives of the singers Viola James and James Shorty - none of whom we'd yet made contact with. Perhaps the biggest surprise, however, was meeting Lonnie Young, Jr., the son of drummer Lonnie Young, Sr., and nephew of fife-blower Ed Young (of the Southern Fife & Drum Corps). Lomax had recorded him playing snare drum with his father and uncle in 1959. We were delighted with the turn-out, and deeply honored to have the opportunity to connect with so many families.

The ceremony began with songs and a prayer by the pastor of Hunter's Chapel, Rev. John Wilkins, who's been enjoying a secondary career as of late as a performer and recording artist. (Wilkins' father, the Rev. Robert Wilkins, cut a number of legendary blues and sacred sides in the pre-war recording era; his composition "That's No Way To Get Along," better known as "The Prodigal Son," was made famous by the Rolling Stones on their "Beggars Banquet" album.) Hunter's Chapel was attended by a number of Hill Country musicians, among them bluesman Fred McDowell, his singer sister Fanny Davis, and Napolian Strickland, who is buried there. (It was also at Hunters Chapel where Fred and Fanny recorded their first version of "You Got to Move," the song that perhaps brought McDowell his greatest fame when the Stones covered it in 1971 on their "Sticky Fingers.")

Hal Reed spoke next. Reed is the grandson of Lucius Smith - the Hill Country's last black banjo player and the one man whom Lomax recorded on all three trips he made to the region - and he held the crowd rapt with his remembrance of his nonagenarian grandfather strapping a bass drum to his chest the morning he died. Reed now makes his home in Betterndorf, Iowa, where he runs the Muddy Waters blues club, but he is a passionate advocate for the appreciation and promotion of the Hill Country's musical traditions, and he left few dry eyes in the room.

Anna Lomax Wood, President of ACE, then gave a presentation surveying Lomax's Hill Country documentation, playing audio samples from his 1942 and 1959 trips and showing video from the 1978 expedition. She displayed the repatriation guide that ACE published for distribution to the families and for donation to the Senatobia Public Library. (The guide contains a finding aid to all of Lomax's audio, photo, and video collections from Tate and Panola Counties, plus essays, a bibliography and discography, and a DVD containing all of the digital documentation.)

Anna then introduced Don Fleming, ACE's Executive Director, who described an important aspect of our repatriation initiatives — the creation and dissemination of lesson-plans based on the music of the recipient communities. The plans for Lomax's Mississippi Hill Country collections were developed by Dr. Patricia Campbell, Professor of Music of the University of Washington, and offered for kindergarten through adult levels as step-by-step experiences for developing listening and vocal and instrumental skills, as well as means of promoting awareness and pride of local musical traditions. Useful for schools, libraries, churches, and other community organizations, they're offered for free through the ACE site.

Don also explained that a key part of repatriation is establishing contact with the artists represented in Lomax's collections. We actively seek out these artists and their estates, and events like the Hill Country celebration give us unique opportunities to make these connections in person. We give copies of the recordings, photographs, and videos to the families and ensure that rights to the works are properly assigned to the musicians and their estates. Alice Pierotti and Olga Wilhelmine were instrumental in finding and inviting many of the families who were able to attend.

The celebration ended with more music by Rev. John Wilkins, joined on harmonica by Hal Reed. After a sublime lunch at RB's Soul Food on Highway 55 between Senatobia and Como, the community gathered in the Main Street Gallery, owned by Sledge Taylor, for a few short but moving words by Samuel Boone, one of Napolian Strickland's two sons. Rev. Boone had traveled to Como from Cleveland with his wife, children, and grandchildren, for the unveiling of his father's Blues Trail Marker. The call on the fife then began the march to the marker, hung with black fabric. Led by Otha Turner's granddaughter Sharde Thomas, the Rising Star Fife & Drum Band is the last of its kind in North Mississippi, and Sharde is an extremely gifted and conscious bearer of the tradition. Joined by two brothers on bass and snare drum, Sharde drew the crowd out of the gallery and into Main Street, where we slowly paraded to the spot where the third of Como's Blues Markers had been erected. (The earlier two being those dedicated to Fred McDowell and Otha Turner.) After remarks from an official from the Mississippi Board of Tourism, as well as Como Mayor Everette Hill, and a prayer from Rev. Wilkins, the marker was revealed. Photos were snapped, the band started up again, and the assembled walked back up Main for cake, a quick nip or two behind the bar, and more music from Rev. Wilkins and his band, some gospel from Ester Mae Wilbourn, Miles Pratcher's grandaughter, plus a short set by the great Hill Country bluesman R.L. Boyce.

On Sunday we visited some area landmarks, including Otha Turner's home in Gravel Springs; the site of his famous picnics, which continue to be held annually. (Lomax and a film crew were on hand for the 1978 picnic, and edited clips from this footage are accessible through the Archive's YouTube channel.) From there we drove to Oxford where Alan Lomax Archive Curator and guitarist Nathan Salsburg performed an acoustic set at The End of All Music record store.

On Monday Dr. Patricia Campbell presented a lecture, "Return to Senatobia: The Musical Riches of a Region," to teachers and students at the University of Mississippi. The lecture — an introduction to Lomax's Mississippi field recordings and the lesson plans that she and her associates have created with them — was an sponsored by Dr. Alan Spurgeon, Director of Music Education and Graduate Coordinator in Music at Ole Miss. Dr. Spurgeon arranged for a meeting that afternoon with Norm Easterbrook at the Ford Center to discuss partnerships to use Lomax materials to strengthen community identity, and with Greg Johnson, curator of University's Blues Archive, to explore ways to bring Dr. Campbell back to Mississippi for a lesson-plan workshop. The next day Dr. Campbell presented the lessons in one high school English class and two middle school music classes in the Oxford area.

On Tuesday we met with Shelly Ritter, the director of the Clarksdale Blues Museum to discuss possible exhibit ideas, and that evening we were hosted by John and Jenn Mohead at their home on King's Island. We climbed into their two cars and were given an incredible tour of their family's Mohead Plantation, where Lomax made recordings in 1942, and may or may not have been kicked off the property by Mr. Mohead himself.

On Wednesday we met with Malika Polk-Lee, Chief Administrative Officer and Jack McWilliams, Director of Facilities/EIO, at B.B. King Museum and Delta Interpretive Center in Indianola. Also in attendance was Ann Shackleford, a longtime Lomax family friend, the museum's former communications director, and current consultant. We discussed the repatriation of Lomax's Sunflower County material (largely recorded at the Mississippi State Penitentiary, or Parchman Farm) use of our lesson plans, and potential exhibitions.

The next day we were in Biloxi, attending the Mississippi Library Conference, where Don Fleming gave a keynote speech entitled "Bring it on Home: The Repatriation of Mississippi Music to Mississippi People." He detailed our last two years' repatriation events in Como and Senatobia, and emphasized the importance of engaging local libraries as partners. That afternoon we were participated in a panel called "Using Mississippi's Traditional Songs, Chants & Movements in Storytime for All Ages." The panel included Alice Pierotti, Judy Card (Youth Services Coordinator, First Regional Library), Don Fleming, and Anna Lomax Wood.

The response in these communities to Lomax's Mississippi collections and the Lesson Plans was very powerful and many new connections emerged throughout the trip for additional partnerships in Mississippi to distribute these collections.

This repatriation program was developed to preserve and promote the music and oral histories of men and women whose talent and wisdom give a true voice both to their communities and our shared cultural foundation. This work was kindly funded, in part, by the Concordia Foundation, the Mississippi Library Association, and the University of Mississippi Music Department. The rest of the funding came through Benefactors who made a tax-deductible Donation to ACE to support our Repatriation Projects and Teaching Resources.