Calling and Responding to Rosie

1.Raise one question at a time for students’ attention while they listen three times to the opening lines of the song (about one minute).

“Who is singing?” (Answer: Male singers)
“Is there one or more than one singer?” (Answer: Solo and group)
“What is the tapping sound you hear?” (Answer: Something percussive)

2.While listening to the recording, clap, tap, or pat the steady pulse. Without the recording, ask students to count the number of resting beats in between the percussive beats.

4. Take the movements of the beat one level further, modeling a locomotor movement that contains a clap on “1” and three shuffle-steps on beats 2, 3, and 4. (A shuffle requires a simple forward slide, so that the ball of the foot touches the ground/floor and pushes a few inches forward and then stops.) Practice this sequence in a circle without and then with the recording, like so:

5.Through repeated listenings, students may now grasp the form of the song as “call and response”, featuring solo and group singers. Encourage them to sing the responses, beginning with “be your man” and then “in your hand”, “you made me”, “I got free”, and so on. See below. 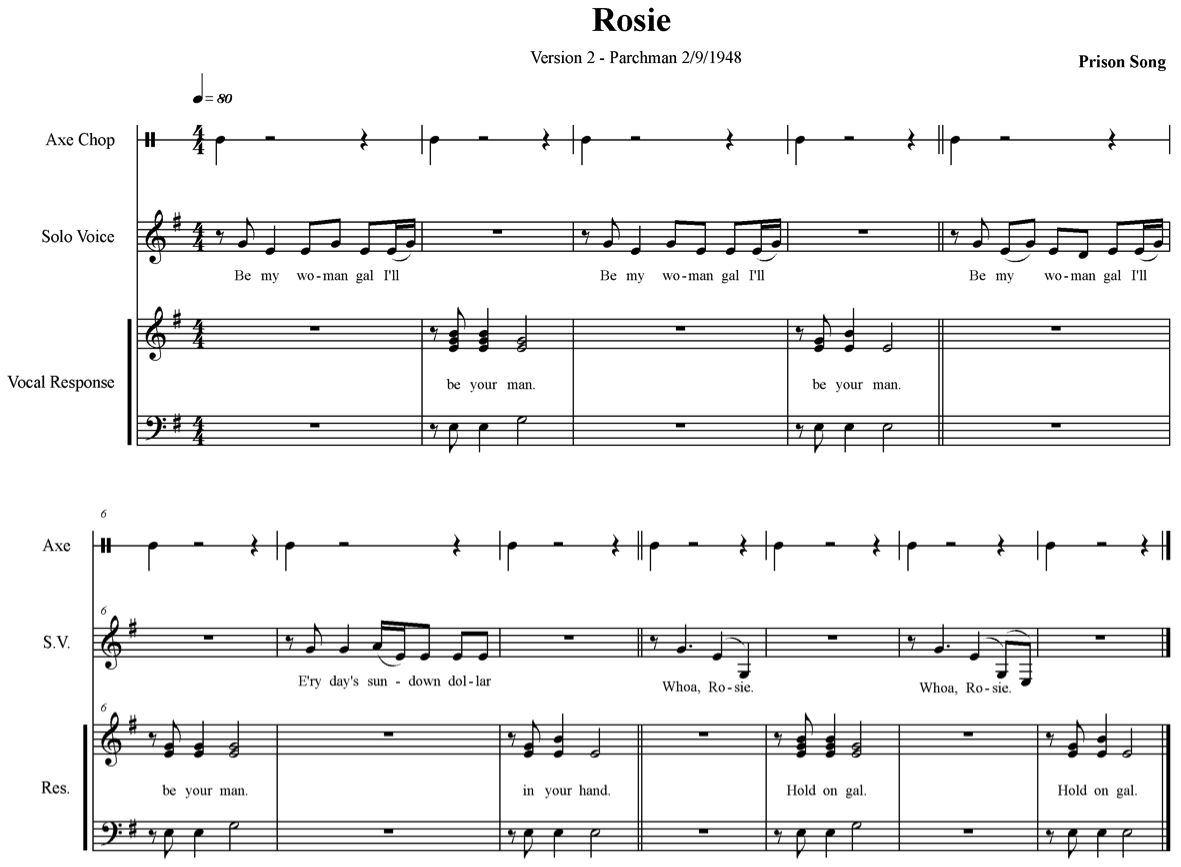 Transcription by James B. Morford

6. Divide students into “callers” and “responders”, and direct them to singing. After a run-through, switch parts so that all students can experience the calling and responding. (Help students to sing the response in harmony.)

7.In a circle, suggest that students move their clap and shuffle-step (#4) while they sing.

1. Talk with students about the common presence of “Rosie” in the work songs of convicts in the Parchman State Penitentiary in Mississippi. “Rosie” was the quintessential queen of Parchman, the heroine, and an inspiration for working, following the prison rules, and eventually being pardoned and released. (Back up to provide further explanation about Parchman, a work farm in the Mississippi Delta for men who had gambled or could not pay his debts. They found themselves “on the wrong side of the fence”, in prison for a sentence of a year, working in the hot fields and woods on a plantation, chopping trees in hoe gangs in rhythm together.)

2. Review the lyrics of “Rosie” for answers to these questions:

“What is the promise that Rosie made?” (Answer: To be married when the singer-worker is given his freedom)
“Where might Rosie be coming from, ‘down that road’”? (Answer: Possibly from the prisoner’s home town, from the train station she took to get to Parchman)
“What might Rosie be carrying in the ‘heavy load’”? (Answer: Proper clothes and shoes for the singer-worker as he is freed)

3. Share with students the description of Alan Lomax about his visit to Greenville, Mississippi, where he asked a crowd of men if they knew “Rosie”, the song: “Almost every hand in the room went up: virtually every man there had served time in the pen [prison]….We took some of these crippled-up veterans of the Delta frontier to a site on a bend of their river. They formed up in a ragged line with their heavy hoes, and staggering a bit, they advanced through the shimmering mirage of heat waves toward the camera, swinging their heavy hoes with the fervor that had cultivated the gardens of Africa and the plantations of the South. And as they reenacted the Parchman field work, they sang to Rosie again…with the poignancy and passion of their young, heart-hungry years in the pen.” (P. 265, The Land Where the Blues Began)

4. Watch a video of the Parchman Penitentiary and identify the sounds of the axes chopping wood, the vocals, and the text: Mississippi Delta & Hill Country (1978), p. 22 (A reenactment of a Parchman Farm work-song and video.)