At Work with Eighteen Hammers

1. Play the first minute of the recording, asking students to clap or tap along with the sound of the hoe (or hammer). Ask students about what they’ve just tapped: Was the rate of the tapping the same throughout, or did it change? If it changed, did it occur with more or less frequently after the change? (Answer: the rate does change at around 0:22, when the sound of the hoe occurs at half the speed it was previously.)

2. Listen to the first minute again, asking students to pay attention to the voices. Then ask: Do the voices sing together all the time, or do they sometimes sing solo? If singing together, do the voices sing in harmony or unison? (Answer: the voices alternate between singing alone and together, singing predominantly in unison. Note: you can use this to teach students the concept of call-and-response form, or remind them what it is if they’ve already learned it.)

3. Ask students to listen to the first thirty seconds, and then ask them: is the response the same every time, or does it change? (Answer: there are two different responses between which the singers alternate.) Now, play the song again, asking students to tap to the beat and sing along on the syllable “doo” to the first response. This response is a simple two notes:

4. Play the song again, asking students to tap the rhythm of the hoe (or hammer) while singing on a “la” to the second response. This one is somewhat more complex:

(This notation is a basic outline of the pitches. You will find that this response is often somewhat ornamented, and is even harmonized.)

5. Practice the two responses on “doo” and “la”. Then, replace the “doo” with “uh, well” and “uh huh”, as they listen and sing along with the recording, and replace the “la” with the words “Standin’ in a line”. (See staff notation.)

7. Have the students sing the call part and tap the beat of the hoe (or hammer) while playing the first minute of the recording again. Begin with the starting phrase, “Well, eighteen hammers standin’, standin’ in a line” and proceed from there. (See staff notation.)

8. Divide the class in half, asking one half to sing the call part and the other to sing the response while everyone taps the rhythm of the hoe. You may wish to turn the recording down and listen to how all the parts are coming together.

9. Beyond tapping the rhythm of the hoe (or hammer), invite students to feel that rhythm through a standing movement that imitates the swing of an imaginary hoe (or hammer). Moving downward on beats 1 and 3, and swinging up again on beats 2 and 4, sing the song together. 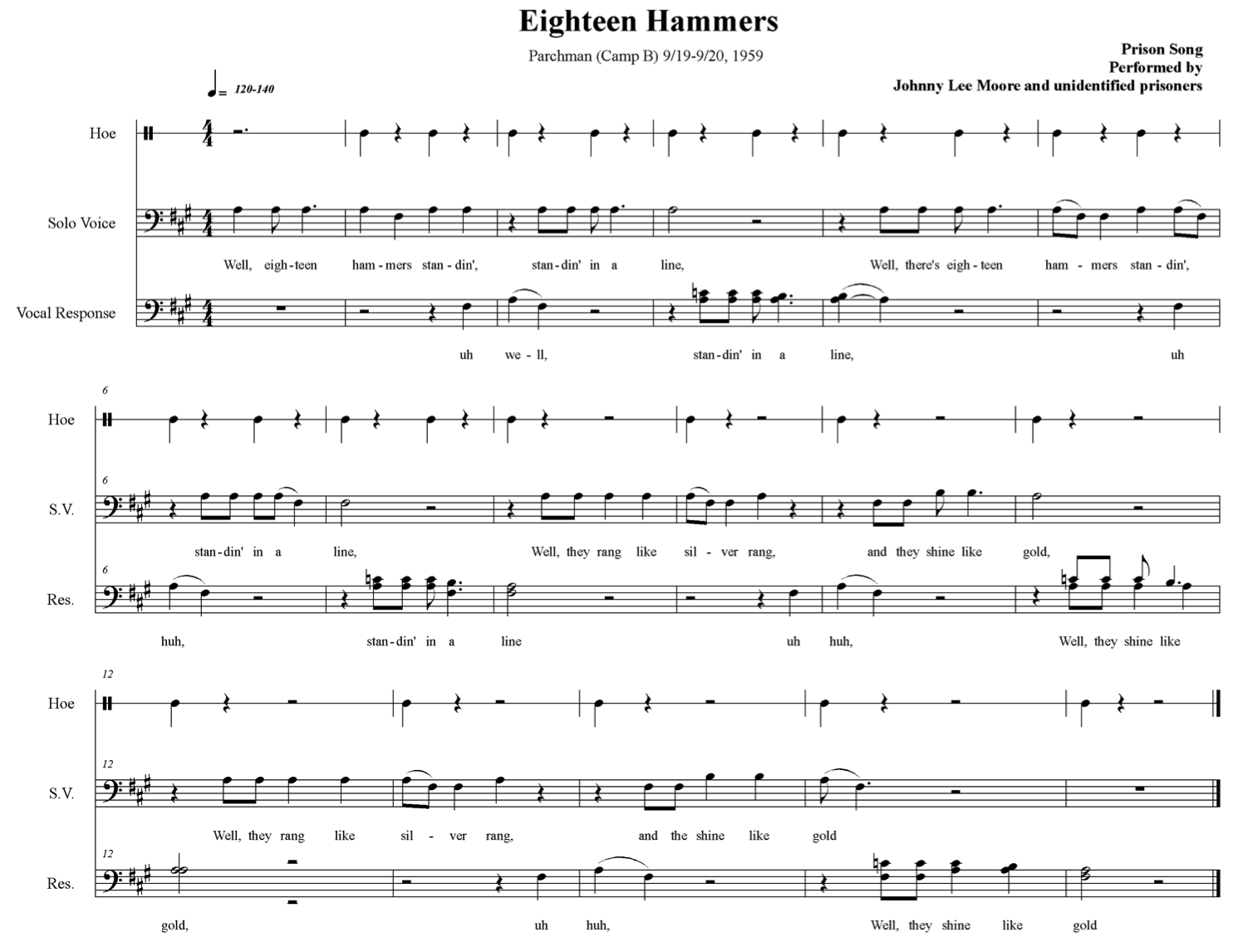 1. Give students some basic information about the recording:

2. Offer some cultural context for the work song. As Eileen Southern shares with us in The Music of Black Americans: A History (1971), work songs were often sung on plantations and were typically a way of coordinating movements among a group of laborers, and also served as a means of “alleviating the monotony of the work…and spurring workers on to fresh efforts.” These laborers were working in the mid-day sun, in extreme heat, and so the singing and movement brought some distraction and relief from their discomfort. (p. 161) Their songs were also tailored to the type of work being performed. For example, a cotton picking song would be a distinct kind of work song from a sugar cane harvesting song, and so on and so forth. This group work song of agricultural labor can be traced back to Sub-Saharan African cultures, and is found across the African diaspora, in African-American, Afro-Caribbean, and other African-influenced cultures.

3. Lecture briefly about the historical and geographic context from whence the recording came. That is, share with the students a brief history of Parchman Farm (i.e., the Mississippi State Penitentiary). As music historian Ted Gioia tells us in his 2006 book Work Songs, the Parchman Farm resembled a plantation in high gear. The Farm was organized in 1904 (or so) to generate income for the State of Mississippi; there were places like it all over the south, and alongside the state prisons were "country farms" and the lease convict system. In his book, Worse than Slavery, David Oshinsky calls this farm concept "an American gulag". Here, the predominantly African American inmates picked cotton, and that laboring was the site of this work song.

4. Have students divide into small groups to do some basic research on other styles of music recorded in prisons in the South (e.g., blues). Students may consult the ACE website for other Lomax recordings, or do research into other similar recording projects, such as Harry Oster’s recordings from the Angola Prison in Louisiana. Students should plan to share their research with their peers, with attention to the following: 1) historical and geographic context of the recording, 2) brief context for or history of the musical style, and 3) a small demonstration of some of the musical elements of that musical style (e.g., form or timbre). Refer also to the vocal qualities delineated in Alan Lomax's Cantometrics, and in a Lomax-authored essay in African American Anthropology: Contemporary Perspectives (edited by Norman Whitten and John Szwed).