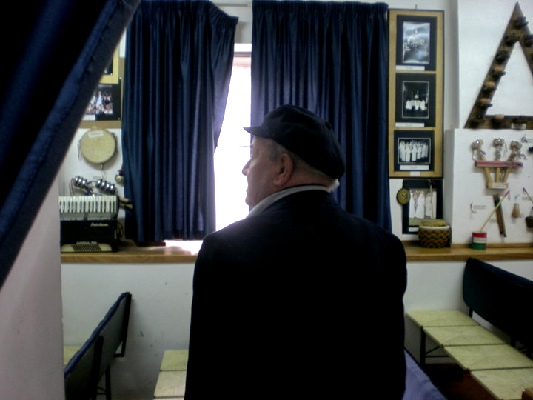 Giovanni Coffarelli, 'high priest of an uninterrupted tradition' and a star in the firmament of Neapolitan music, died on August 31, 2010, at 1:15 p.m. in Somma Vesuviana, Naples, Italy, after a long illness. Giovanni was an internationally known ambassador and teacher of the folk traditions of his native region of Campania, particularly of the ecstatic songs and dances of Christian-pagan ritual and the ironic laments of agricultural laborers, mulateers, and street sellers that are so deeply rooted in Vesuvian soil. He was internationally known as a consummate singer of tammuriate and the cante a figliuola praise songs - dedicated to the Madonna del Castello of Somma - and of the technically demanding fronne a limone and canti alla potatore. As well, he had been a driving force in putting Campanian folklore and popular traditions of on the map. At 75, Giovanni was in no way finished with life, and still had "one or two things left to do."

Born on January 3, 1935 in Somma Vesuviana, an ancient agricultural town on the slopes of Vesuvius, Giovanni came from the poorest sector of society and came of age during the harsh, hungry period of World War II and its aftermath. He was orphaned as a boy and like most of his peers, had scant formal education; he began and ended his life cultivating the land, and with all his later accomplishments, always identified himself as a contadino - a farm worker. In the 1960s, he was taken on at the Fiat factory in Naples, where he experienced the solidarity of his fellow workers and became politicized, and in the seventies was "discovered" by anthropologist Annabella Rossi and her friend, Maestro Roberto De Simone, a Director of the Teatro San Carlo in Naples and a renowned composer and musical director whose works were steeped in Neapolitan mythology and lore. Through Rossi and De Simone, Giovanni joined (and came to lead) an synergistic movement of young musicians, dancers, actors, anthropologists, photographers, students, intellectuals, and grassroots folk artists making, researching, documenting, and reviving folk music, and bringing authentic tradition bearers to the fore. With De Simone he appeared at the Piedigrotta Festival in 1975, and over the years collaborated with such luminaries as Eugenio Bennato, Concetta Barra, Luisa Conte, Fausta Vetere, Corrado Sfogli, Paolo Apolito, Ginette Herry, Lina Sastri, Peppe Barra, La Compagnia del Sannazzaro, La Nuova Compagnia di Canto Popolare, Adriana Boriello, and Francisco de Melis. He did not stray from his base, however, and his muses remained the traditional artists of Vesuvius - notably Zi' Gennaro Albano, Pasquale Ambrosio, Rosa Nocerino, Virginia Aiello, Antonio De Luca, Zi' Peppe, Franco Salierno, Titina Raia, Vincenzo Romano, Ciro Barra.

In that same year, La Paranza di Ognundo, a company of musicians from Somma including Giovanni, was invited to take part in the Smithsonian Institution's Festival of American Folklife on the Washington Mall, and then to tour the United States with other Italian folk musicians. On the Fourth of July, the Vesuvian musicians led a procession into the Lincoln Memorial and made it ring to the sounds of frame drums, friction drums, triccaballacche, scetavaiasse, sistre, bagpipes, wooden oboes, accordion, the double flute, and the haunting canto a figlluola. Alan Lomax, who had made a definitive collection and study of Italian folk music in 1954-56, followed the visiting Italian musicians with intense interest. "Take your music into the schools and teach your children," he urged them.

The U.S. debut of regional Italian folk music in 1975 was followed over the next decade by numerous music tours and festivals funded by the Italian Foreign Ministry and the National Endowment for the Arts and organized by Anna Lomax and the Center for Traditional Music and Dance. Giovanni took part in many of these, while at home, taking Alan Lomax's advice to heart, he worked his way into the Circolo Didattico di Somma Vesuviana (the local school system) so that he could give classes in the rich vernacular traditions of the region. He became a voracious reader of scholarship on the subject and made a special study of Neapolitan folk and fairy tales, teaching himself how to read the obscure 17th-century dialect of Gianbattista Basile's Pentamarone. These and the tales his mother told him Giovanni took into the classroom, teaching his students to act them out and sending them out to take down other stories from their parents and grandparents. Giovanni's students learned to dance the Vesuvian tarantelle and to play folk instruments, and took part in productions of La Zeza Viola, a Carnival play from nearby Mercogliano. Anthropologist Paolo Apolito, a longtime friend, justly dubbed him a native anthropologist.

Giovanni took part in university seminars and festivals in Italy and abroad, including the Paris Biennial; the Portuguese-Greek-Italian Festival in Montemor-O-Novo, Portugal; the Vulcan Munich Festival; the Montpellier Festival; the Night of San Lorenzo in Milan; Polverigi, Ancona; Adda Danza; Sounds of Stone Roma; Carpino Folk Festival; La Notte della Taranta in Lecce. Single-handedly, he revived and coordinated Somma Vesuviana's moribund Festa delle Lucerne (festival of lamps), in which the little neighborhoods of the Casamale (the old town) vie with one another in adorning their doorways with ferns, broom, chestnut branches, and vine shoots; and the narrow lanes, which used to lead straight out into the fields, with little oil lamps affixed to square, trapezoidal, circular or triangular wooden frames. A mirror set up at a distance behind each set of frames gives an illusion of infinite geometric paths of flickering light. In front of each, the neighbors create elaborate, lifelike papier-mache tableaus of harvesting and feasting.

Giovanni's strongest supporter in Somma was Ciro Raia, a Regional Education Director, local historian, and author of numerous books and articles. In 2003, Ciro edited a book of essays about Coffarelli's work entitled E' ghiut' 'o treno dint' 'e fave (the train ended up in the fava bean field), a saying coined by Giovanni meaning, roughly, 'big deal.' Meanwhile, Giovanni launched his grandest project - the Centro di Cultura Popolare located in a 16th-century monastery in the Casamale. Here Giovanni moved his collection of folk instruments, folk paintings and ex-votos, and books, recordings, and videos, and proceeded to hold classes and workshops for children and graduate students from all over Campania. In his moving eulogy to his friend of three decades, Ciro noted, "Even during the worst of his illness, he was always looking to the future. This community has lost a man of great goodness... a complete human being... the citizens of Somma owe a debt to a man too often rejected on account of envy and petty jealousies. It is my hope that his laboratory will be kept open and operating just as he did."

Few people have done so much with so little, yet throughout his life, Giovanni boxed with his own shadows, given to the periodic black depressions of a sensitive man born into harsh circumstances, accomplishing the impossible. He gave most of the credit for his accomplishments to his treasured wife of fifty-five years, Rosa Secondulfo, who said of him, "We've lost the best part of Somma and I've lost my best friend." The couple had two children, Domenico and Gianna, and several grandchildren. Giovanni Coffarelli's funeral was celebrated with pomp at the Collegiate Church of the Antico Borgo Casamale where he'd always lived. Giovanni has no formal titles, but is now being called "Maestro."

Giovanni Coffarelli, interviewed at the Archive of Neapolitan Music in the 2000s:

"I'll begin in the 1970s. People, after the student revolts of 1968 and the reawakening of the working class, we had an economic boom. The Fiat gave us cars, Piaggio gave us the Vespa, the RAI (Radio-Television Italiana) brought us the Festival of San Remo and the Festival of Neapolitan Song. America gave us Jazz, Pop Music, Coca-Cola, and Jeans. In Campania and elsewhere, the culture of the agrarian and working classes was disappearing. In a counter-revolution, intellectuals, artists, ethnomusicologists, sociologists - everyone - began to research folk traditions and search for their own roots. And so [the folk revival] began. But today, friends, our songs are no longer sung with that same devotion. I say this out of my experience: we have changed the language of our traditions, and we the popular masses have acquired the language of television. In Naples, you talk to your cell phone - 'Okay, yes.' Okay, yes. So tell me, how are we going to sing the canto a figliuola? The idea that we should take back our own language, our own songs, and our traditions, is... [voice breaks.] For many of us present here, our music is diminished, because we who make it are few, and few are those who listen to us."