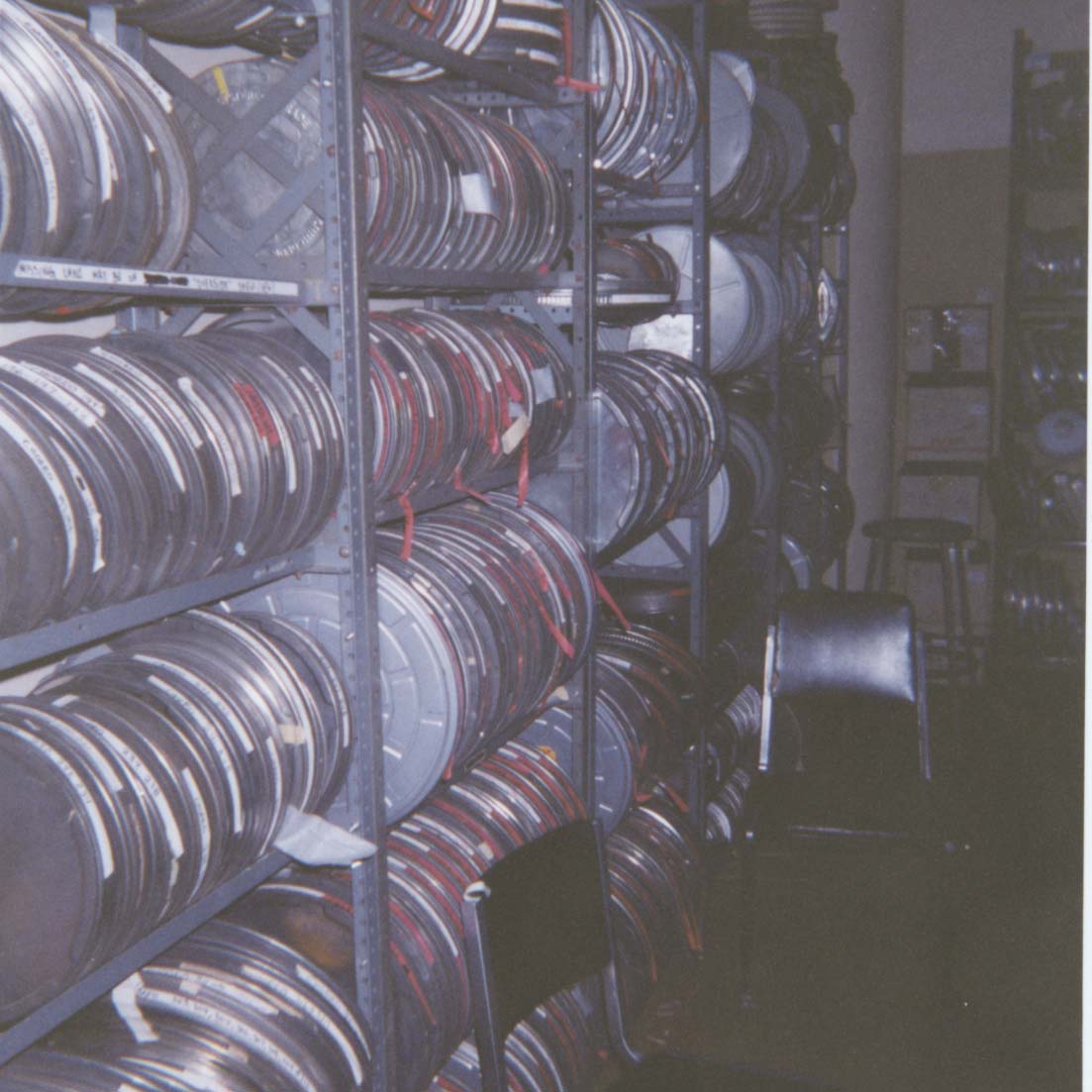 The "Orifice." From 1933 to 1942, John A. and Alan Lomax made thousands of recordings in the U.S. and the Caribbean for the Archive of Folk Song of The Library of Congress. From then on, Alan's independent work travelled with him like the shell of a tortoise, growing larger and heavier; but whether by luck or design, keeping remarkably well through many moves and vicissitudes.

Alan was an archivist by default. It would be misleading to describe this magic box as simply the sum of its contents, an archive per se. It was in fact a working office, the busy hub of numerous projects, and a research lab for which the tapes, photos, films and videos, and notes and manuscripts that he had gathered and created over the decades were constantly being mined. Alan jokingly called it "the orifice" because it swallowed so much.

It was in fact the embodiment of the many ways in which Lomax attempted to make known the artistry of local cultures and ordinary people. And it was the setting for the monumental project of comparative musicology, dance, and linguistic anthropology he undertook with Conrad Arensberg, Edith Trager, Norman Markel, Victor Grauer, Forrestine Paulay, and other collaborators over forty years.

The archive-office stuck to Alan through sixty years, migrating between his 1940s New York apartments, his London and Paris flats, and back to Greenwich Village at 121 West Third Street, growing ever more voluminous and dominating his living spaces—until he rented a separate apartment qua office from Columbia University in the 1960s. When the rent for this space doubled in the mid-1980s Joseph Murphy, then Chancellor of CUNY, stepped in at the last moment with an invitation to Hunter College. "The office" and a grateful Alan made their last move together to a spacious set of rooms in Hunter's Fine Arts Building, near the entrance to the Lincoln Tunnel.

What's in the Archive

Some 4,000 hours of recordings of traditional music, interviews, and narrative from all regions of world culture in the following formats: 2,200 1/4" reel-to-reel tapes (paper-backed, cellulose-acetate, and polyester); 300 acetate transcription discs; 1,000 cassette tapes; and 200 DATs. Lomax took great care of them, so in spite his complete lack of curatorial resources, they are in excellent condition.

1. Recordings by Alan Lomax. Made in the field in the Southern United States, the Caribbean, Britain, Scotland, Ireland, Spain, Italy, Morocco, Romania, Soviet Georgia, and in Lomax's various living quarters, where he hosted many traditional singers. Also included are radio broadcasts, concert recordings, album masters, and Lomax's discussions and working sessions with colleagues.

Lomax's 1/4" reel-to-reel tapes had been manufactured in an era when stock was scarce and expensive and in some instances short ends were spliced together to make extra reels, so in preserving them, splices had to be checked and often remade. All the tapes had to be rewound at slow speed to make sure they were not being stretched or compressed.

2. Field Recordings by Pioneering Collectors, representing most regions of world culture, constitutes 3000 hours of 1/4" reel-to-reel tape. Along with Alan's own recordings and his LPs (see below), this collection was the source of data for Cantometrics, a comparative study of the world's music and its relationship to culture and the distribution of populations spearheaded by Lomax, Conrad Arensberg, and Victor Grauer in the early 1960s.

4. Radio Programs. From 1939-1957, Alan Lomax wrote, produced, and hosted radio shows and series for CBS, the Office of War Information, the Mutual Broadcasting Network, the BBC, and RAI Italy. His 1939–41 folk song programs for children and adults on CBS, American Folk Songs, Back Where I Come From and Wellsprings of Music, featured a live interracial casts singing together. Right after the attack on Pearl Harbor, Lomax called upon colleagues and friends from across the country to capture "man-on-the-street" reactions to the bombing, which were broadcast on People Speak to the President. The Black Encyclopedia of the Air featured one-minute spots on black history and culture. Produced in 1968-69 by Lomax with John Hendrik Clarke, Raoul Abdul, Arnold Hartley, and Jack Walker (narrator), it aired over black radio networks. Scripts, playlists, and correspondence concerning these shows (and of 1956 television shows for Grenada TV) are in the Alan Lomax Archive.

Former members of Franklin Roosevelt's inner circle were interviewed by Lomax in preparation for a 1982 commemoration of the 1939 White House concert for the King and Queen of England. Those interviewed include Marian Anderson; Josh White's widow, Carol White; historian Bernard Asbell; journalist Joseph Alsop.

1. Dance & Movement Collection. Assembled from 1961 to 1994 by Alan Lomax, Irmgard Bartenieff, Forrestine Paulay, and their assistants, who solicited the world's ethnographic institutes, film distributors, broadcasters, embassies, and private archives for footage for their study of world dance. While its special focus is on indigenous and folk dance and movement, it includes footage of modern dance, ballet, and classical dance traditions from Asia, Africa and Western Europe.

Ca. 150,000 feet of 16mm and 35mm film, in the form of both complete films and segments copied from originals, comprises this collection. It is indexed by culture area and is extensively annotated in six linear feet of indices detailing the films' contents, provenance, authorship, format, and Choreometrics data.

The Cord Library of film segments illustrating the Choreometrics variables;

Thematic compilations of film segments for planned films to further illustrate the research results of Choreometrics.

Four hundred hours of U-Matic video shot from 1978 through 1985 under Alan Lomax's direction in the American South; Arizona; Washington, D.C.; Philadelphia; and New York in preparation for a series of PBS programs entitled American Patchwork. Represented are former levee and railroad workers, farm women, bluesmen, and versifiers from the Mississippi Delta; New Orleans funeral and jazz parades; Cajun cowboys; Sea Island children; Yaqui Indian dancers and Norteño musicians from Arizona; Sacred Harp singers from Alabama; miners, black fiddlers, and storytellers from Virginia, Kentucky, and Tennessee; bootleggers, tobacco workers, and flatfoot dancers from North Carolina; cloggers and bluegrass bands from Georgia; break dancers from Pennsylvania; Italian and Italian American folk musicians at the Giglio Festival in Brooklyn, New York; and folk artists at the Smithsonian's Folklife Festival. Also of interest are interviews with Alan Lomax, filmed for use in the series.

With a grant from Save America's Treasures fund of the National Endowment for the Arts the 400-plus U-Matic videotapes were cataloged, transferred, and digitized to high-resolution masters DigiBeta, DVCam and DVD copies are retained at ACE.

2. The Performance Style & Culture Research Collection documents a 40-year program of comparative research on music, dance, and speech spearheaded by Alan Lomax from 1956 through 1995, which among other things delineated 14 families of expressive style representing the world's principal traditions. Copies of remain at ACE.

This is the largest assemblage among Alan Lomax's collected works. Working at ACE from 2005 to 2007, Archivist Nancy Johnson processed more than 100 linear feet of paper files housed in 200 document boxes and 100 binders of indices, plus 200 binders of mainframe computer runs and 150 boxes of punch cards. These materials are all linked to recorded examples of music, dance, and speaking on tape and film. Copies remain at ACE; the originals are available to researchers at The Library of Congress.

3. The Global Jukebox. A prototype multimedia program bringing together all facets of the Performance Style & Culture Research collection in a single, interrelated dynamic platform. The four drawers of papers and ca. 8,000 computer files pertaining to the Jukebox, plus hardware, are retained at ACE while the Jukebox is being developed.

4. Personal Papers. Four boxes of personal letters and diaries remain in Lomax's Estate. Personal papers that may be scattered among the Manuscripts at The Library of Congress are under restrictions.

In the early 1950s, Alan Lomax began to document his field trips with the camera as well as with the recording machine resulting in over 5,000 black and white negatives and prints of photographs taken in England, Ireland, Scotland, Spain, Italy, the Caribbean, and the Southern U.S., and 750 color slides and prints from the Caribbean and Lomax's American Patchwork project. There are 2,000 negatives and prints of performers, Alan Lomax, and his friends and family taken by other photographers.

For preservation, all the negatives were duplicated, and both negatives and prints were cleaned and placed in archival protective sleeves. ACE houses one set of dupe negatives and all TIFF and JPEGs; Lomax's Estate retains many original black and white prints and personal photos.

The LP Library consists of nearly 1,700 commercial LPs of folk and indigenous music from all over the world, organized by Lomax according to culture area and geographic region.

Lomax's library of folklore, literature, ethnography, social sciences, and musicology is housed at The Library of Congress.