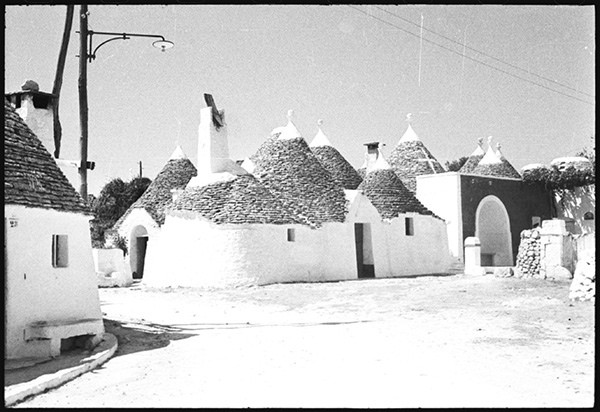 Here’s a report from ACE friend Massimiliano Morabito, musician and ethnomusicologist of Locorotondo, who also gathered all the information about the protagonists of the recording and photo sessions, and organized the photo exhibit and repatriation event:

Alan Lomax and Diego Carpitella arrive in Locorotondo, Puglia on August 18, 1954. The mayor accompanies them to the neighborhood of San Marco where there are many singers. Throughout the day the two researchers work in this and several nearby neighborhoods using a Magnecord Pt6. They record sixteen songs divided into eighteen tracks on tapes labeled T370, T371, and T372. These include lullabies, songs of agricultural labor, devotional/processional songs, back and forth joking songs, quadrilles, and a kind of fast tarantella called a pizziche pizziche (bite bite), based on an old belief that when you have been bitten by a tarantula, you must dance until you rid yourself of the venom.

Listen to T370R04, "Tomma tommë." This is a work song illustrating the succession of tasks during the reaping. According to G. Rohlfs, the term tomma tomme derives from “tomolo,” a unit of measurement of the land surface in use in southern Italy until just recently. Then listen to T372R02; this song is sung during the harvesting of tobacco, olives, and grapes.

On April 28, 2018, in the Parish Hall of the neighborhood where Lomax and Carpitella had recorded, there was an exhibit of the Lomax’s Locorotondo photos. The previous Sunday, the parish priest announced the event at mass. “Do not go to Mass next Sunday,” he said. “Go to this. It is very important. Culture is spiritual food.” The hall was packed to overflowing, with four hundred local attendees.

Alan Lomax’s family were present and, for once, opening speeches were brief. The exhibit was transformed into a repository of individual and collective memory. Members of the community who had been involved remembered and shared those moments, reconstructing and renewing that part of their past in an exchange of stories, songs, and dances with the young people. It was an evening of strong emotions in which the songs recorded in ’54 were heard and sung again.