The Music of R. L. Burnside (and Sons)

Activity 1: Blues from a Poor Boy

1. Draw student attention to these features on the first two minutes of the video, “Poor Boy a Long Way from Home”, with these questions:

“What is this musician, R. L. Burnside, singing about?” (Answer: That he is a “poor boy a long way from home” but that this reality “can’t do me no harm”)
“Why could he be far from home?” (Answer: He might be away at a job that requires him to travel—anything from a sales job to the life of a traveling musician may be keeping him on the road)
“What (and how) is the musician playing?” (Answer: An electric guitar on which he strums chords and occasionally plays melody; he uses his fingers instead of a guitar pick and there is a small electric amplifier)
“Where is he playing?” (Answer: In a yard or field; there is a fence behind him, low grass around him, and a few trees)

2. Following a discussion of what the students observed, play the video again (to 25”), this time asking students to listen carefully to the structure of the blues lyrics. Prompt with the question, “Do you hear any repeated words?” (Answer: “Poor boy, I’m a long way from home” is sung three times.)

3. Discuss how in blues form, the first line or phrase raises a question. It is repeated, in this case, twice repeated for a total of sounding the phrase three times.

4. Play the video again (to 25”), challenging students to count each of the three repetitions of the phrase. Ask them “What comes next?” (Answer: He sings “Whoa, can’t do me no ….”. Quite likely, the singer has let go of the final word, “harm”, as he smiles and continues to play.)

5. Explain that this new phrase is what Alan Lomax refers to as “the clinching phrase (which) usually descends to a low note, roundly concluding the matter”.

6. Show the notation for this four-phrase blues song. Follow it while viewing the video again. Students may find themselves nodding, tapping a pulse, and even singing along, which can be encouraged. 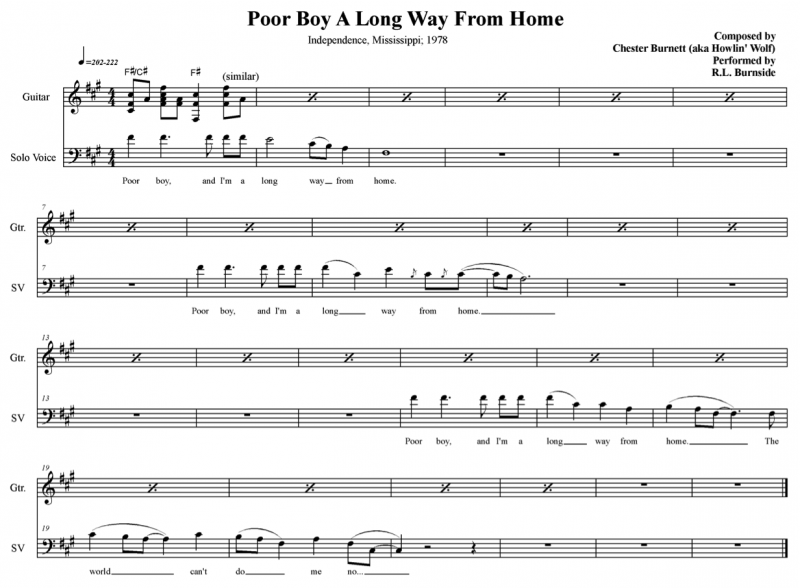 Transcription by James B. Morford

7.Distribute guitars, and show students that the melody requires a single chord, the e-minor chord. Challenge students to strum in the rhythm of the bluesman, R. L. Burnside.

8.Provide some information on R. L. Burnside: He lived in the northern Mississippi hill country (1926-2005), and worked as a fisherman, a sharecropper, a factory worker (for a time in Chicago), and a musician. He claimed as his influences both Mississippi Fred McDowell, with whom he studied, and a cousin by marriage, Muddy Waters. He recorded for a label called Fat Possum Records, and performed with various musicians such as Jon Spencer, Cedric Burnside (his trandson and a drummer), and Kenny Brown. He was known for his one-chord guitar-playing that gave a droning effect.

1. Play the video, “R. L. Burnside’s wood-chopping holler”, with only the introduction that the same musician from the previous activity is featured in this clip. Following the viewing, facilitate discussion of what they observed. (Answer: A man with a hoe, chopping wood in a rhythm that is regular, then stops-and-goes again, singing about “finding his babe” who has left him)

2. Watch and listen again, this time pointing student attention to the musical and lyrical features. This melody takes on a florid opening line that is repeated once, and which is followed by “a clinching phrase”. Discuss how the song seems to be in blues form, but is referred to as a holler. Alan Lomax observed that hollers share these features: “They are solos, slow in tempo, free in rhythm (as opposed to the gang work songs), composed of long, gliding, ornamented and melismatic phrase, given a melancholy character by minor intervals as well as by blued or bent tones, sounding like sobs or moans…”.

3. In another viewing of the video, encourage students to listen for features of a holler.

Activity 3: The Rhythm of the Hambone

1. Play the video of R. L. Burnside and his three sons, Duwayne, Dexter, and Michael Joe. Ask students to describe what they see and hear. (Answer: R. L. Burnside with his guitar, in the same place as in the first video, with three boys who are rhythmically patting their legs and chest)

2. Describe the rhythmic movement of the three boys as a performance art called “hambone”. Watch the video again, accepting that students may wish to pat along with the hamboning boys.

3. Discuss the “hambone” as a phenomenon of rhythmic performance (also known as “Juba dance”) that involves slapping and patting the arms, legs, chest, and even cheeks, which is found in the southern United States and in the Caribbean. Sometimes, vocal chant or song is added to the rhythmicking, but the body rhythm is the key feature.

4. Play the video again, watching how there appears to be a developmental increase in rhythmic sophistication and precision with advancing age, from the youngest to the oldest boy.

5. Offer students an opportunity to try out some of the hambone rhythm movements, and to share them in small groups and with the class.