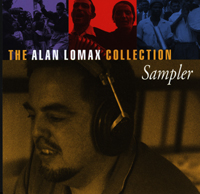 Compiled and edited by Gideon D’Arcangelo
The Collection Sampler surveys the full scope of Alan Lomax’s groundbreaking work after his departure from the Library of Congress in 1942, with recordings of American folk balladeers; African-American prison songs; Caribbean island singers; Irish, English and Scottish ballads; Spanish and Italian folk songs; and examples from his anthologies of music from Indonesia, Japan, Mexico — in short, a global soundtrack. Truly an aural history of the 20th century, the sampler and its accompanying 76-page booklet introduce the listener to the series that comprise the Alan Lomax Collection.

“Be warned, this insightful collection may well start you on a long musical journey of your own.”—Editorial review, Amazon.com

“Rounder does us all good and valuable service in restoring these recordings to the music store.” —Folk & Acoustic Music Exchange